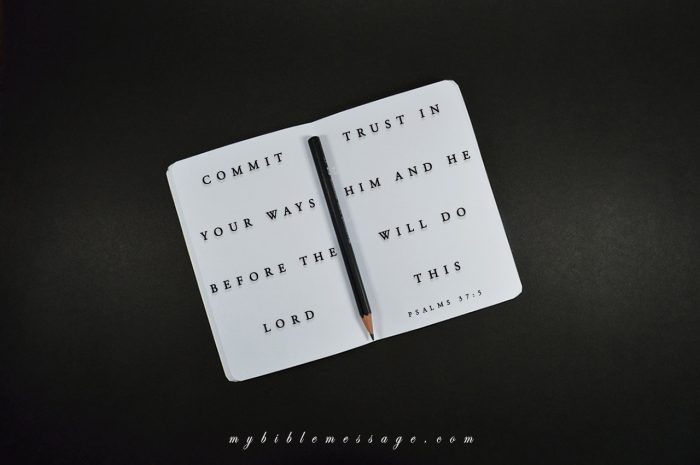 The Bible says to commit our ways before the Lord – every single thing, no matter what we do or how we do it. But how often do we do commit? The answer is – hardly a few times. We say we rely on God for His will but in reality our methods are relying on man for things to be done – quick and easy – no God in between and no praying for long hours. In the present era, God has been kept for emergencies only – to fix things when all our efforts have dried up. All our plans and all our paths should be committed – to succeed and to win over it. This is what we talk about today.

Committing a task before God is what we rarely do. Because our first thoughts are to seek the advice of those who are around us rather the One that is above us. We rarely have issues with God – a 5 min prayer would give us our mental satisfaction because we just don’t want to sit for so long. And so continues the routine – “God is satisfied”. So we think! But He is far from being satisfied. Many of us fail to do the simple basic things but we do the more complex ones. We have learnt of how a Christian life should be and how to prevent a life from sin. But the basics such as committing all we have before the Lord, we forget about.

The Word tells us in many ways to commit all our plans prior to our actions we take. It was David who wrote the psalm which is shown above, in which he says to seek God first before anything and He will succeed it for you. Whenever David went to war, he sought the counsel of the Lord many times before he went for it. He never just fought those wars, he won them all. Years later, King Solomon, David’s son, who was the wisest man who ever lived says a similar thing in Proverbs 3:5

“Trust in the Lord with all your heart and lean not on your own understanding; in all your ways submit to him, and he will make your paths straight.”

In the book of Esther, we read of a young girl named Hadassah, an orphan who was taken care of by her uncle, Mordecai. She would later be named Esther when she would become Queen. Esther fasted and prayed for her people to be saved from the hands of Haman, who had planned to kill all the Jews whom he was against. We see that Esther committed her issues before the Lord, fasting and praying and trusting His actions that He will definitely succeed the nation of Israel from all their enemies. Finally, Israel was redeemed of all their miseries. They thrived against their enemies and won the war against them. By committing her issues before the Lord, she triumphed over her enemies once and for all.

I have realized from many life experiences including my own that once we suffer a major setback, we try to overcome it with our own experiences rather than committing it to the Lord. We never stop to try and find the solution unless all our efforts have gone in vain. That is when we commit, at the end when all hope is lost. This is where we need to bridge the gap. There is the world and then there is God. We can try on our own to achieve our results which may go in vain or we can commit it all to the Lord which will surely yield results.

“In their hearts humans plan their course, but the Lord establishes their steps.”

It all points out to one thing alone – Pray and give the rest to God. He will command your ways and open those bronze gates for you.

Referring to Psalms 37:5, there are three things we can do in all the actions we take:

Committing all our actions means giving it all to the Lord.  Citing the example above, Esther committed her problems before the Lord through fasting in prayer. Fasting results in surrendering all we have before God, just as Esther did. It is time to commit your problems now. Seek the Lord’s guidance in your plans. It’s never too late to commit anything before God. It’s always early.

It’s never too late to commit anything before God. It’s always early.

Commit it all today without having a second thought. And see God performing wonders from above.

Now for many of us there is this deep burden inside. We all have our share of doubts as to how will we ever believe what we don’t see? The Bible says to simply put our faith in God. Jesus spoke about faith to His disciples:

“For truly I tell you, if you have faith the size of a mustard seed, you can say to this mountain, ‘Move from here to there,’ and it will move. Nothing will be impossible for you.”

God knows about our faith and our abilities. This is why He says – Have faith as small a mustard tree, and see your problems move. To supplement our prayer, we need faith to move it. To move all mountains and to clear a path along the way.

The usual proverb is Seeing is Believing. But it’s time to believe without seeing. The third part in Psalms 37:5 says “And He will do it.” which means that God is going to do what He says He is going to do. He is going to fulfill that promise for you. He is going to give you what He promised He would give you. God is no debtor. And He surely makes sure that we see our promises.

The beauty about God’s promises is that they happen at the right time at the right place. So if you are worrying why your promises haven’t happened yet, it because God has something in store for you – something that nobody could have ever imagined. That’s the best thing about God – He surprises us with what we have never imagined our whole life. Hallelujah!

Continuing to go further in Psalms 37, we read in verse 6 which says “He will make your righteousness shine like the dawn, the justice of your cause like the noonday sun.” We are God’s righteous people. All our helplessness is being seen by God. He sees us and knows the trials we have faced in our life. Hence, for what you have sown all these years, you will reap them tenfold.

Finally let us all “Be still.” As verse 7 says “Be still before the Lord and wait patiently for him.” God works behind the scenes. Being calm when a storm approaches in life – that is what God wants from us. We have to try not to get frustrated by failures all around us. The Bible says “and wait patiently before Him.” This is faith that has to work at that time. Let us try and be patient when that storm hits.

As I have understood lately, some earthquakes molds certain parts of the earth to turn into beautiful sceneries. They cause a shift in landscape and the result may be a waterfall which could be beyond our imagination. In the end, it captures the eyes in such a way that you would fall in love with it. This is how situations in life mold us to turn into a better person. We turn into a wonderful, more mature person.

The first thing we should do should never be the last – To commit all we do before God. God expects more in us all the time. He is the Potter and we are His clay. And that is reason why we are still alive. Words can never describe how much He has done for us.

Keep in touch with us via Twitter @mbm4u and Facebook @mybiblemessage as we bring in more blog posts in the coming days. Please do share this blog post with your friends and family. Do share your experiences with us via email at mbmteam@outlook.com. God bless.